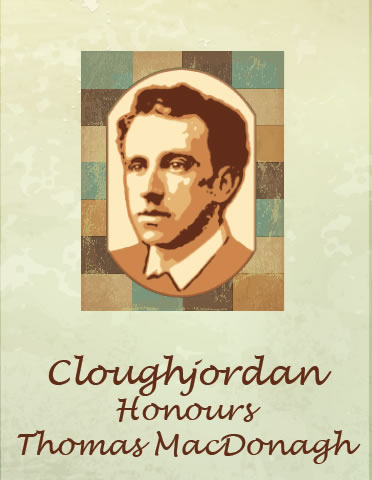 The Thomas MacDonagh Summer School is a celebration of the heritage and culture of Cloughjordan and the surrounding countryside.

This year Joseph (18 May 1883 – 25 December 1922), the youngest child in the MacDonagh family is commemorated. Thomas, in his last letter, entrusted him with the care of his family.

In following the ideology of his brother, Joseph spoke out against the restrictive laws of the authorities. He was elected unopposed, as a Sinn Fein MP for the Tipperary North constituency, at the 1918 general election and became a member of the first Dail Eireann. He was Director of the “Belfast Boycott”, an attempt
in 1920-21 to boycott goods from Ulster that were being imported into the south of Ireland.

He opposed the Anglo-Irish Treaty and voted against it. He was re-elected for the same constituency at the 1922 general election, this time as an anti-Treaty Sinn Fein TD, but he did not take his seat in the Dail. He took part in three hunger strikes during his political career. He died on Christmas Day 1922.

The Thomas MacDonagh Summer School begins at 10am on Saturday 5rd May, and is chaired by Dr. Mary McCarthy of UL. Advance booking is required; contact Thomas MacDonagh Centre 087 3946862/macdonaghweekend@gmail.com.

Click here to view the timetable for the 2018 weekend