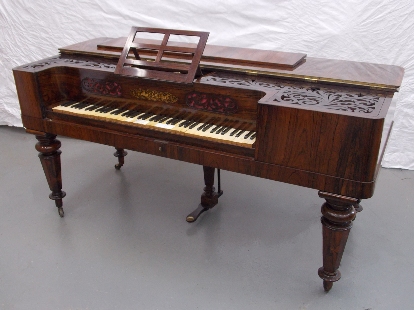 Cloughjordan has welcomed the return of the MacDonagh pianoforte and have given it pride of place in the MacDonagh museum. Once belonging to the mother of Thomas MacDonagh and generously donated to the museum by the Hennessy family the instrument has returned from emergency conservation work at the home of Conservation Letterfrack. As the company name implies this conservation company is based in the village of Letterfrack, Co. Galway. A long journey for such a delicate instrument, however, the pianoforte is no stranger to travel having initially come from the MacDonagh home in Cloghan, Co. Offaly.

The Group was delighted when a preliminary examination of the pianoforte by Sven Habermann, manager at Conservation Letterfrack, indicated the instrument was in better condition than originally thought. Arrangements were made for the necessary conservation work to be undertaken which included replacement of some of the ivory key coverings, repair of small damage to the veneer and a full restoration of the woodwork and veneer.

This pianoforte is of immense sentimental value to the people of Cloughjordan. Not just the instrument on which Tipperary’s signatory of the Irish Proclamation fostered his love for music but a pianoforte on which many of the children of the Parish were taught the same appreciation.