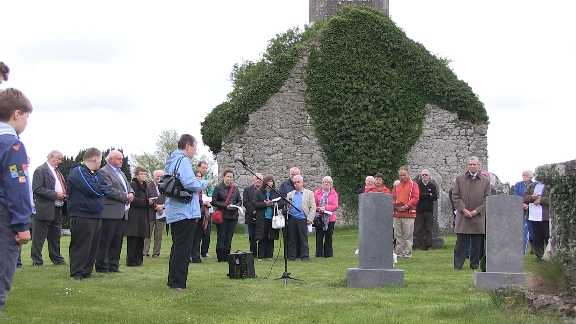 There was a very large attendance at a ceremony held in Modreeny graveyard during the Thomas MacDonagh Weekend, with people from all religions and none and from all walks of life coming together to remember the men from the area who died in ‘The War to End War’.

Forty nine thousand soldiers from the island of Ireland were killed during the First World War. This included  fifty nine young men from the Cloughjordan area, whose names were read out during the Ecumenical Commemoration held on 3 May 2014. In ‘A Time to Remember’ prayers at the graveside of local man Sgt James Somers VC were led by Father Tom Hannon, the Reverend Stephen Neil and the Reverend Brian Griffin.  In a most moving ceremony those present were reminded that ‘They shall not grow old as we are left to grow old; age shall not weary them, nor the years condemn’ and a wreath was laid on the grave of Sgt Somers VC by his nephew, Harold Williams. Sgt Somers’ niece, Pearl Whitfield gave the reading and a lament was played on the bagpipes by Joe Barry from the Thomas MacDonagh Pipe Band, Templemore. A Colour Party was provided by members of the Cloughjordan Scout Troop. After a short period of silence, the Last Post was played by Patrick Rowley-Brooke.